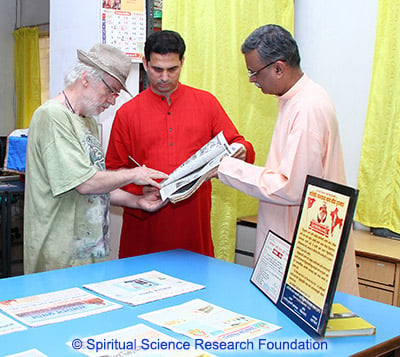 On 15 Apr 2014, Dr Ulrich Berk visited the SSRF Spiritual Research Centre along with Hindu priest Achal H. Apte from Mapusa, India. Dr Berk, from Müblingen, Germany, is a PhD in Philosophy, former professor at the University and the President of German Association for Homa therapy and is an expert in Agnihotra. He has been performing the Agnihotra ritual for the past 35 years and is an ardent advocate for the ritual. He has been conducting research on the Agnihotra ritual and how it positively affects our environment. In fact he is the co-ordinator of all research on Agnihotra worldwide. He came in touch with SSRF seekers after they contacted him in order to procure raw materials for performing Agnihotra in Europe.

While talking to him, we commended him on championing the cause of Agnihotra even though he is German. To this Dr Berk responded, “In the days when the Vedas originated there were no countries, everyone practiced Dharma and all of humanity was one”. While showing him the various Holy sacrificial fires that have been performed in the SSRF Spiritual Research Centre, Dr Berk’s knowledge and interest in mantra and sacrificial fires was impressive. He stated that most Indians view Agnihotra as just a cultural ritual and not as a ritual that has a deep spiritual and scientific significance behind it. While showing Dr Berk the sound recording studio, he requested that Hindu priest Achal recite a mantra in the studio as a gesture of goodwill. This is co-incidentally the first time anything has been recited in this new recording studio so far.

Dr. Ulrich Berk shared about his visit to the SSRF Spiritual Research Center:

“I was impressed by the professionalism in the work your volunteers do – spreading the Vedic knowledge in the form of a newspaper, some magazine, many books, and also using the media of internet, audio and video. Then, having so much literature translated in many Indian languages and international languages – really a big challenge! Of course I was happy to see that soon the first book in German language also will be printed.

Your studies on subtle energy effects including the exhibition of objects which show such effects, is very interesting. Modern science still has some way to go in order to understand such phenomena. But if we can show replicable effects of methods like Agnihotra on PIP photos it will help to increase the acceptance and also hopefully get some scientists interested to look deeper into this area.

It was a very positive experience to see all the volunteers working in the Ashram with positive spirits, smiling and apparently being happy, though doing concentrated and professional work there. Very encouraging seeing that these two things can go hand in hand – if only people do their work for a higher goal.”

Dr Berk has expressed his desire to stay in touch and share our research on Agnihotra and sacrificial fires.