Some thoughts on what should really scare us about Halloween 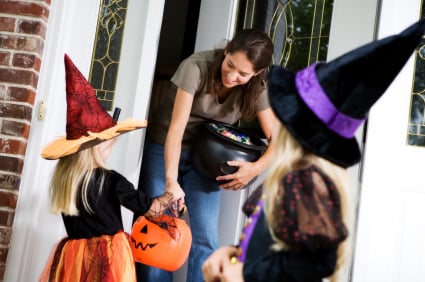 I have noticed an interesting phenomenon surrounding Halloween. 364.25 days a year, cobwebs are no good and eyesores. For some of us, they are downright scary (because where there’s a web, there’s a spider). Yet on October 31st, cobwebs are considered decoration and ‘cool’, as opposed to a sign that we’ve gotten lax in our domestic duties.

In fact, Halloween is sort of a get-out-of-jail-free card for many people. The one day a year where women (and men) can get away with cavorting around in their undergarments without getting arrested, when toilet papering houses, throwing eggs, vandalism and violence is almost acceptable. Police are out in force to deter any criminal mischief-making, and often shrug off otherwise reprehensible behavior as ‘Halloween always brings out the crazies’.

Add to this, haunted houses, conducting seances or use of ouija boards in fun and jest, to (pun intended) “get into the spirit of things”. At a spiritual level we can agree, this can’t be good. Aside from the obvious increase in Raja-Tama that such behavior creates, it also is a gateway for many other spiritual problems, such as possession . So many people suffer from haunted houses, trouble from ancestors, and so on. And yet on Halloween, the suffering these issues cause people, are forgotten in large part if not outright admired.

Rarely do we take into consideration the impact it has on us, at any level. And in fact, if we look a little closer, it should be apparent to anyone and give us pause. It was a day historically given to remembering dead souls (Ref: Wikipedia). However it has turned into a festivity of the underworld, which we humans actively promote and instigate. It has in essence become a source of negativity which we could have control over. This is compared to similar phenomena such as full and new moons, the impact of which is natural and out of our control. By contrast, Halloween and its resultant negative energy is within man’s control, and yet we continue to engage in a way that is severely detrimental to society and mankind as a whole.

As such, the more we actively engage in celebrating and participating in Halloween, the more the detrimental effect it has. It’s no longer about pretending to be someone or something else for a day or night. In fact, at a spiritual level, we do transform; we become an antenna and beacon for negative energy.

MELBOURNE / NEW JERSEY (26 October 2011) – A basic law of spiritual science states that ‘The word, touch, form, taste, smell and its related energy coexist’. This means – where the name and form of ghosts, demons or negative energies exist, such as on Halloween, their distressing energy is present too. As the form and colour of the decorations and costumes used in Halloween celebration are similar to that of ghosts, they act as antennae to attract a lot of negative distressing energy.
Read the full press release on Halloween celebration…