If the student is willing, the Guru is always teaching 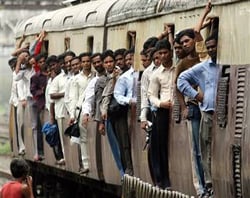 I would like to share with you an experience that has etched an indelible impression in my mind that the Guru teaches us through all situations in life if we are willing to learn from it.

The following incident happened in 2002 on one of my trips to India for spiritual research. Surburban trains are the fastest way to get from South Mumbai to North Mumbai but they are also unbelievably crowded. As I was in hurry to get to my destination in North Mumbai, I made the decision to hop on to a train during rush hour even though I was carrying some expensive video equipment with me. I wondered, “How bad could it be”. For those of you who have ventured into a Mumbai local during rush hour will probably be saying bad with a capital ‘B’.

At each station more and more people tried to get on to the train until we were squashed worse than sardines in an over-packed sardine can. At about the time when we were finding it difficult to even breathe and I was on only one foot as the other foot did not have a place to rest, a passenger tried to get onto the train with an office armchair. Everyone stared at him with disbelief and some even abused him as he jostled his way into the compartment carrying the chair on his head. The man struggled with the chair holding it above everyone’s head for a few stations.

Then all of a sudden at a station between the crowds rushing in an out when he found a small gap he put down the chair and sat on it right next to the door. Suddenly from the worst seat in the house he had the best seat, a plush leather armchair with a headrest and an exclusive view of Mumbai going by. From angry stares upto now directed at him, he was suddenly the envy of the train compartment as passengers grudgingly admitted to themselves that that was a pretty good move. It was a moment that I will remember for a very long time as the vividness of the sudden change in the man’s fortunes impressed me.

Doing spiritual practice under the guidance of SSRF, I have been trained to look at each situation as an opportunity to learn from and use it towards my spiritual goal. Standing on one foot, very sweaty and squashed, I prayed to the Guru principle to teach me something from this unique incident. Slowly and steadily as if in a whisper the answer came to me; that all our problems in life can be made into opportunities just as the man had done. This incident and learning created a paradigm shift within me and for the rest of the journey I experienced spiritual emotion of having had a personal encounter with the Guru principle which no sweaty armpit or fish basket smell could sabotage.

Luxury lifestyles – what is actually important after all?
Importance we give spiritual practice