Some time back we have published an article on Spiritual effects of speech. In this article we mentioned that most languages have some words that are considered inappropriate. These words are also known as swear words or foul speech and people often use them to express emotions such as anger, frustration or surprise, or to achieve a social outcome such as insult, harassment or humour. Recent studies of recorded conversations reveal that roughly 80–90 spoken words each day – 0.5% to 0.7% of all words – are swear words, with usage varying from between 0% to 3.4% (Ref: Jay T. (2009): The Utility and Ubiquity of Taboo Words)
Below we share a drawing based on subtle-knowledge obtained by Mrs Yoya Vallee who has an advanced sixth sense of vision about the subtle-effects of swearing. 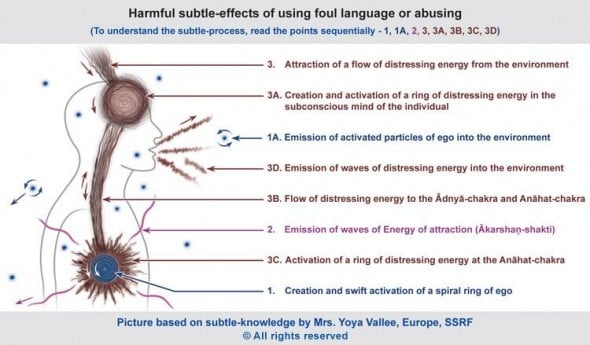 We were grateful to see that Russian government has banned the use of swearing in media and arts.

A law has been signed in Russia on Monday, 5 May 2014, that will ban swearing in films, music and public performances.
Explicit books and CDs will have to be sold in sealed packages with a warning that reads “contains obscene language,” CNN reports.
The law will levy fines as high as $1,400 against organizations and $70 against individual offenders. Repeat offenders could face steeper fines and a 3-month suspension of business.
A panel of obscenity experts will define the finer points of the law, deciding which words could damage the Kremlin’s stated goal of “protecting and developing language culture.” – Time.com and CNN

We suggest to our readers to refrain from using foul language. We also encourage those of influence in media, arts and lawmaking to ban foul language in more countries around the world.