A prediction about the coming times

From time to time we come across some studies related to the risk of upcoming natural disasters. There is heightened interest in the likelihood of further disasters especially after big tragedies such as the recent repeated earthquakes in Japan. Meteorologists, seismologists and other scientists conduct research into the physical factors that affect turbulence on Earth. In 2006 for example, a scientist from the University of California demonstrated that the San Andreas fault in California may have been stressed to a level sufficient for the next “big one,” as it is commonly called; that is, an earthquake of 7.0 magnitude or greater.

On the other hand, some of SSRF’s seekers have advanced sixth sense. With their sixth sense ability and the grace of God, these seekers can cross the boundaries of time and precisely see future events. Yoya Vallée is one such seeker. In 1999 Yoya had two premonitions about the coming times. We are presenting them below. She also drew the vision she got at the time. Most importantly, she got her premonitions confirmed by H.H. Dr. Athavale, a higher level Saint.

[In today’s times, due the low average spiritual level of society and increased activity of negative energies, we cannot be sure whether any premonitions are true or merely illusions planted by a negative subtle-entity. This can only be confirmed with certainty by a Saint.]

In 1999, I had a dream that I was in Japan, around Shibuya, Tokyo when a really big earthquake struck. The earth opened up and started to stretch and spread apart and crumble. Some buildings started to collapse. 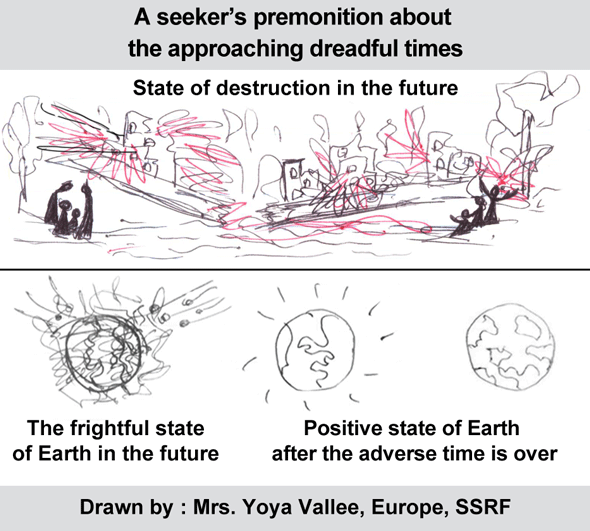 Then some people came to me in a state of panic and pulled my arms as they needed help. So I was holding them and helping them and then guiding them. I was being told by God which way to go, so as to avoid the buildings which were going to collapse. I was also told which buildings would remain standing and so I could choose the safe streets to walk through.

Even though there were cars on the street, I did not care about them. I felt peaceful inside and felt protected and could walk right through the traffic. I felt my chanting began spontaneously from within and nothing outside could shake my peace.

Yet again, on June 28th 1999, I received information from God in the form of a picture.

(*) Yoya feels that ‘Time will change’ means: the era or yuga will change – from Kaliyug to Satyayug.

[Some people who have the supernatural power of premonition or vision develop an attachment to the fame it brings and spiritually regress. Such was the case with the well-known seer Nostradamus, whose life serves as a cautionary tale for those of us who have been gifted with some supernatural power or sixth sense. Only regular spiritual practice as per the six basic principles of Spirituality can help ensure that our spiritual gifts are not utilised for profit and fame, and all of us need to be constantly vigilant about our ego. ]

Spiritual research on the spiritual life of Nostradamus
Armageddon for establishment of the era of rekindling Spirituality in mankind
Spirituality prepares us for natural disasters and unexpected events
Predicting the Future
What are the six basic principles of Spirituality?