Negative effects of horror movies on society through their widespread growth

Recently, multiple people watching the screening of a horror film called “Raw” at the Toronto International Film festival felt very ill and even lost consciousness during the screening due to very visually gruesome scenes depicting cannibalism, lacerations and various other gory scenes.

Despite this negative impact, the movie has received overwhelmingly positive reviews, and some people were even excited about the fact that the movie generated such an intense negative impact on viewers.

Though the media coverage of this movie makes it seem like it is a unique event, it is far from the first horror film to evoke such a response. Horror movies since their early days in the 1930’s have a history of people fainting, reliving traumatic experiences, having seizures and even dying from heart attacks while watching them. In spite of this horror as a genre has grown in popularity over recent years. Recently, the horror genre has become even more accessible with the popularity of TV horror shows such as Hannibal, the Walking Dead, and others. All of this has turned horror into a household phenomenon.

Given these negative effects of horror movies and the fact that they can evoke such a strong response from audience members, one may naturally wonder why people keep watching horror films and what kind of impact they have on people, on children and on society as a whole.

Negative effects of horror movies at a psychological level

Impact at the level of subconscious mind

While watching a horror movie can seem like a harmless escape from day-to-day life, as per our spiritual research, the impact is deep and quite negative both at a psychological and spiritual level.

A spiritual principle states that the word, touch, form, taste, smell and its associated energy coexist. Let us take a simple example of saying the word ‘lemon’; when we do so immediately in the mind we are able to imagine the smell, taste, color, texture and form of lemon. At a spiritual level the energy frequencies of a lemon can also be felt by those with activated sixth sense. In addition, there is a saying that the viewer is affected by the scene, meaning that everything we see or feel makes an impression in our subconscious mind.

Horror films frequently depict ghosts, demons, possession, murder, violence, rape, gore and other horrible acts, and following this principle, it means that the form and energy of these acts becomes activated, and they get imbibed in the subconscious mind of the viewer. It is quite obvious that having such visions and thoughts imbibed in the subconscious mind cannot have any positive impact on a person’s mental health.

Specific increase in the personality defect of fear

Fear is one of the personality defects that are predominant in everyone to a larger or smaller extent, and it is a root cause of many other defects and various mistakes and sufferings that people experience in life. Hence in order to have a happy life, we should make efforts to reduce fear, which leads to a calmer state of mind, more self-confidence, better relations with other people and numerous other benefits. Since horror movies are mostly based on activating fear in viewers, they go directly in the opposite direction and instead keep increasing our impression of fear.

Each time we feel fear, we further reinforce the impression of fear in the subconscious mind, so by repeatedly being exposed to situations that make us feel afraid, we start feeling more fear in our day to day lives as well.

As a result of increased fear the person can become more susceptible to depression, more closed to people, develop an inferiority complex and even develop more serious disorders like paranoia.

As children’s minds are very impressionable, this negative impact of fear on them is even higher, and watching horror movies can cause them serious psychological problems that last much later into life.

Experiencing prolonged fear after watching a horror movie as a child

I personally remember watching horror movies as a child and feeling quite afraid. For example, I watched one horror movie when I was 12 years old. After watching the movie, I was frightened thinking ghosts were around me and trying to harm me for days.

Negative effects of horror movies at a spiritual level

Everything that exists emits some form of energy, and this energy is related to the components of Sattva (purity and knowledge), Raja (passion and action) and Tama (impurity and ignorance). Most commercial movies emit spiritually negative energy which is high in Raja-Tama. When it comes to horror movies, the quantity of Tama component is among the highest of all other film genres. The Tama component pollutes the environment and directly influence the viewer by creating a covering of negative energy around his mind and body.

In addition to having more Tama component, the acts depicted in horror movies match the acts and desires of ghosts and negative entities which reside in the regions of hell. In turn, these entities get attracted to these movies, they inhabit the area where the movies are watched and start affecting the viewers.

Due to the impact of Tama and ghosts, the person may start to experience various prolonged side effects, such as increased headaches, palpitations, nightmares, sleep paralysis, visions of ghosts in dreams, feelings of haunting in the household, an increase in aggressive desires and even possession by ghosts.

I was with some friends and they played a horror movie. As soon as the movie started playing, my friend perceived a foul smell in the room. We looked around to see where the smell is coming from but we could not find the source. At this point I realized that it was a subtle spiritual smell that manifested in the environment due to the horror movie.

Given the negative effects of horror movies, it is clearly in the best interest of society that such films are not made. Unfortunately, the number of releases in the horror genre made per year has increased drastically over the past 20 years. 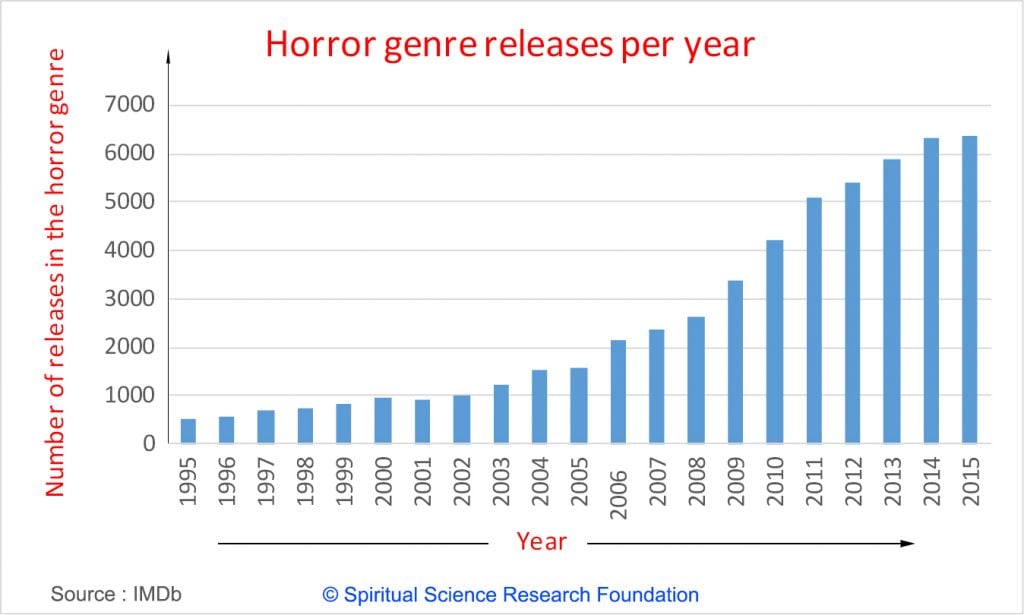 This rapid growth in the creation of horror movies is yet another proof of the spiritual degradation of society, and the increased negativity in the environment which we have been able to discover through spiritual research. It also relates to the intense subtle battle which has been happening and progressively growing over the last 20 years between positive and negative forces (to read more please see our articles on World war 3 predictions and the Battle of Good and evil). It is very interesting to see that the graphs of the intensity of the subtle battle and the number of releases in the horror genre show similar increases and vectors of growth.

This also brings us to the real reason why the horror genre has expanded so much recently. Negative energies from the negative subtle regions of the Universe are using horror movies as a medium to spread negativity and increase their hold on society. Negative energies find a suitable person to affect, give them thoughts about making a horror film and they can even give the specific thoughts about what can be included in the film. The people making the film act as per these thoughts without knowledge that they are acting as per the wishes of negative energies.

What can be done?

So what can we do at a practical level to protect ourselves from the negative effects of horror movies? As a start, we can avoid watching horror movies whenever possible. In case a horror movie is being played in our immediate vicinity and there is nothing we can do about it, we recommend that you pray to God for protection, focus on chanting the Name of God and apply spiritual healing measures to minimize the negative subtle impact. In addition, you can educate your friends and family about the negative effects of horror movies at the psychological and spiritual levels and refer them to this blog. By spreading awareness, we can help others to make informed decisions regarding watching horror movies.