This Halloween, we report on one other malpractice observed during the festival – that of denigrating religious figures, God or deities. In New York City, supermodel Heidi Klum dressed up in a costume resembling the Hindu Goddess Kali. This type of stunt displays disrespect towards the aspect of the God principle represented through that form, especially when it is done to attract public attention. A basic law of spiritual science states that ‘The word, touch, form, taste, smell and its related energy coexist’. This means where the form of God is present such as in the form of deity Kali, God’s attendant divine energy is also present. Hence that form is something to be revered, rather than used for fun, entertainment or publicity. 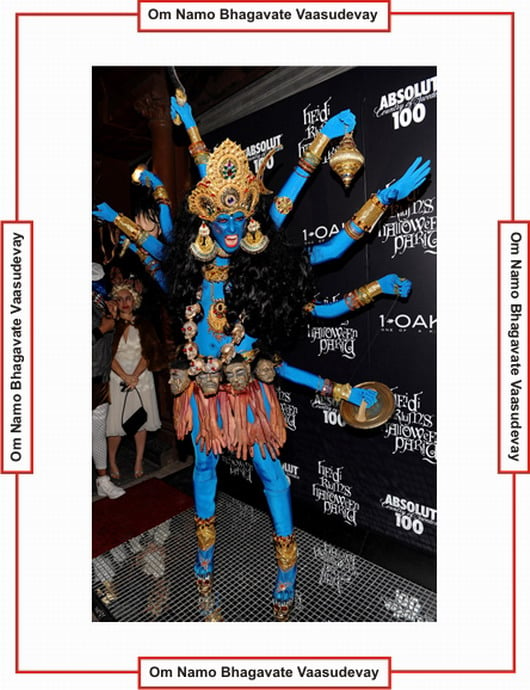 [Photo via ONTD. Protective border to minimise the effect of distressing frequencies that emanate from the photo.]

During the Halloween preparations, Heidi Klum reported her husband asking her: “Why don’t you do an Indian goddess? Like a scary Indian goddess?” Klum goes on to say: “I loved it because she [Goddess Kali] is so mean and killed all these different people and [had] fingers hanging off [her] and little shrunken heads everywhere.”

According to spiritual science, female deities like deity Kali are generally associated with one or more of the three basic aspects of God – creation, sustenance and dissolution. Deity Kali is one of the deities that is associated with the principle of dissolution, and each of her features such as the weapons in her hands, the garland of severed arms, etc. carry a spiritual meaning. For example the severed head she holds in one of her hands is that of a demon, and it signifies destruction of ignorance or attachment.

It is therefore best to refrain from commenting on the gross aspects of a deity’s form without familiarizing oneself with their spiritual significance.

Similarly, designing, producing, buying or using dress up gadgets like the ones designed by Normal Bob Smith amounts to denigration of the Jesus Christ principle. Several years ago, this person launched a website, allowing users to play with a dress-up doll by placing movable layers of clothing on top of a crucified Jesus. Outfits available on site for dressing up the model include red devil pyjamas, a skeleton, a wizard and a pink female corset. The author had also produced a companion refrigerator-magnet set, which was picked up by retailer Urban Outfitters, until citizen’s protests drew the sale to a halt. 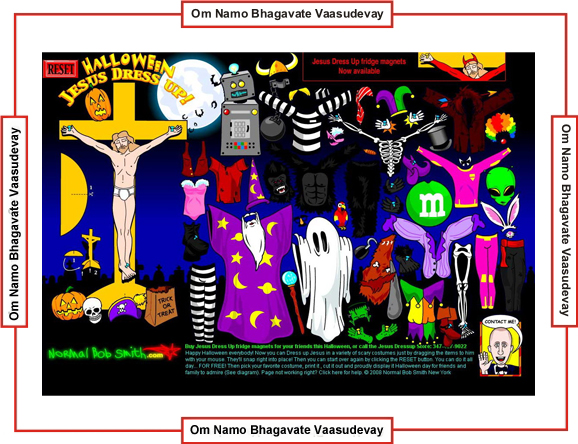 One should be alert towards such forms of irreverence, and where possible, prevent or oppose them. This is for the benefit of both those, who are – consciously or not – agents of the denigration, as well as for the benefit of society at large. God’s presence will be experienced on a larger scale only when respect towards His forms is expressed and protected.

Do you know of any other denigrating Halloween practices? Have you protested against such types of Halloween denigrations? Tell us your story.

Spiritual Perspective: Halloween
Halloween Increases the Probability of Attacks by Ghosts
Definition of a deity