In order to shoot the interview with the subtle department seeker Ms. Sonal Joshi, we chose Dr. and Mrs. Desai’s residence. The place in the house that we chose to shoot the interview was very scenic and had big large bay windows. The downside however was that there was too much of backlight and this allowed us only a few hours of shoot time, i.e. in the early hours of the morning and towards sunset. The shoot was scheduled for the last week of April which was right in the middle of summer with not a cloud in the sky. We started shooting in the evening on 21 April 2009 and soon realised that we had only one hour to shoot between the time the backlight reduced and the sunset time started. 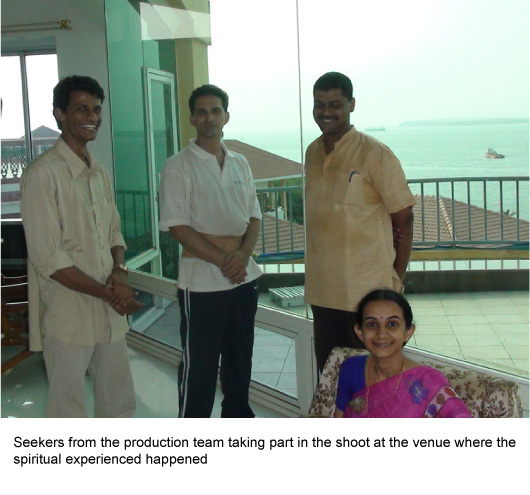 Realising our problem, that night on the way back to the ashram and SSRF’s research centre, I prayed to the Guru Principle and to the deities of the Absolute Cosmic Elements if they could provide us with an overcast sky. An overcast sky would increase the time we had to shoot as it would reduce the intensity of the backlight.

That night I was woke up at 3 AM with thunder and lightning erupting in the sky. Then it began to rain very heavily. The production team had a 4 AM start to get to the shoot venue. Though we drove in pouring rain, I was so happy to see the rain and paid gratitude to the Guru Principle and to the Absolute Cosmic Water Element. Sure enough the sky was overcast throughout the day and we were able to get much more shoot-time during the day.

The night prior to the last day of the shoot, the camera crew slept at the Desai’s residence. We were scheduled to start at 6.30 AM and had to pick up Ms. Sonal Joshi from her house at 5.30 AM. However the whole team overslept and only got up at 6 AM. Repeated calls from Ms. Joshi did not help as all our phones were on silent. When going in the car to pick her up, I prayed to the Guru Principle and to the deity of the Absolute Cosmic Water Element admitting my mistake and asking for help. I looked out of the car window and it seemed like a clear day and I wondered if my prayer would be answered. We started the shoot finally at around 7 AM. As we started the shoot clouds began to appear from nowhere and they stayed covering the Sun. As soon as the last dialogue was uttered, within a few seconds, the Sun came out from the clouds and the clouds dissipated once and for all.

It was a very unreal kind of experience to see the forces of nature coming to help with a simple prayer. I had a lump in my throat and tears welled up in gratitude. I felt internally that even though we made a big mistake by not waking up on time, the deity of the Absolute Cosmic Water Element came to our help as He had pity on us but mainly out of respect for His Holiness Dr. Athavale’s mission.

Horrifying supernatural encounters section
Hollywood actress studies SSRF video of demonic possession
Have you seen “Live an Aware Life”?
What is a spiritual experience?
How does prayer work?