Divine particles appearing on the therapeutic stockings of His Holiness Dr. Athavale 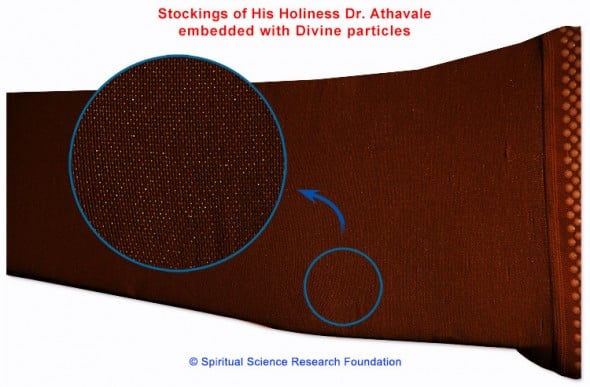 On 29th of Jan 2014 a spiritual phenomenon has taken place in the Spiritual Research Center in Goa, India. Divine particles were found on the compression stockings of His Holiness Dr Athavale. Hundreds of Divine particles have appeared spontaneously on His stockings and between the weave of the cloth on both stockings.

This is not the first time that SSRF has witnessed such phenomena. On 05 July 2012, His Holiness, Dr. Athavale found golden Divine particles on his hands. On consecutive days thereafter, seekers began finding the same Divine particles in their homes and in places of service unto the Absolute Truth, across India. After that Divine particles started appearing in homes, belongings and body of seekers of SSRF all around the world. Soon after, we have received information from seekers from other spiritual Paths also receiving Divine Particles.

The particles were examined closely by seekers with an advanced sixth sense, and it has been concluded that such particles emit Divine energy.

After further investigation, we discovered that the Divine particles appear in various colors, such as:

Divine particles typically appear on the skin and clothing of Saints, however, seekers who are at a spiritual level of 60% or more, and seekers who have strong spiritual emotion have also witnessed these phenomena in one way or another.

No matter where you are in your spiritual journey, you too can experience such spiritual phenomena if you do consistent spiritual practice as per the 6 basic principles of Spirituality.

You can begin spiritual practice by taking three easy steps:

SSRF is available online, via Skype, and via teleconference. We are also very active on Facebook, Twitter and Google +. We look forward to sharing experiences with you!